Dispatches from the front: week 5 - Delayed by Chaos

Creidhnan has been waylaid by the powers of chaos, so I have chipped in to collate the progress of the 11th Legion this week (Hence why its late).

I have completed another episode in VLOG Road to Blog Wars, this time with a basing tutorial (if you can call it that) for my now completed (spoilers) WraithGuard:

TotalTyke hosted games night last week and it was Creidhnan to play Wazdak in preparation for blog wars.
So it was 1850 points a side below is a brief Battle Report by Creidhnan:

Creidhnan: This week I had a quick game using the new Space Marine Codex, against Wazdak and his Nurgle Chaos.
Rough lists!

Chaos Space Marines (with Chaos Daemon allies)
Chaos Lord (Nurgle)
20 cultists
Nurgle sorcerer
2x 6 Plague marines in rhinos
2x Predator with Heavy Bolter sponsons
2x Helldrakes with Baleflamer (ulp!)
Daemon prince, wings, Psyker (level 2?)
Great unclean one, psyker (level 2?)
Nurglings
We played Kill points, Hammer & Anvil. No night fight. I took first deployment/turn.
High(/low?)lights:
Thunderfire cannon eats squads - especially when you finally figure out how the barrage rules work!
The Daemon Prince made himself toughness 8 (immune to my puny guns) and chomped on a bike squad that had carelessly wandered too close. Before they even got to attack. Then survived 4 missiles and 2 Las-Cannons to the face.....
To go down to a Heavy Bolter. Oh, the ignominy....
On the bright side, Helldrakes still eat squads (in two phases - curse you vector strike!)

After seeing four AA missiles bounce off a passing Helldrake, the tactical squad meltagunner decides to show them how it is done... 6 by 6 by 6! Scratch one HellDrake.
The next turn, the missile gunners were obviously impressed, because they repeated the trick..

Enfeeble + Haemorrhage = A big mess of the Emperors finest..
We called the game after Chaos turn three, Wazdak feeling he was no longer in position to contest the game. He still had his plague marines, sorcerer and Great Unclean One in the fight and the lord, lone cultist and Nurglings milled about in his back field. Unfortunately I still had the majority of my firepower, having only really lost the bikes and 3 of the 4 special weapon squads.
However, when we totaled it up it came to 6 all! I think the game would have rested in my next shooting phase. If I could have taken off the Great Unclean One and the cultist, I think I had the win, so it was probably a fair call.

Overall, I had some good luck with damage results on the HellDrakes - I don't really have an answer to them, and they're so devastating. The new space marine book seems fairly solid - you can certainly fit a lot more in. And re-rolling 1's always helps!

Prospero: He's arrived! Ahriman has at last joined the ranks of my Thousand Sons. 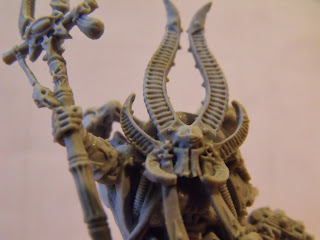 As befits someone of his stature, I decided to mount him on a bit of wrecked dreadnought for a bit of extra height. Should hopefully have started painting during the next week. 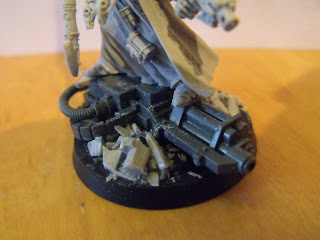 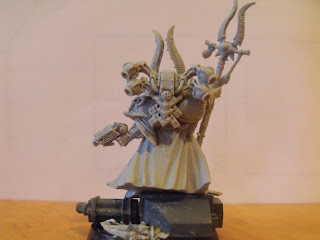 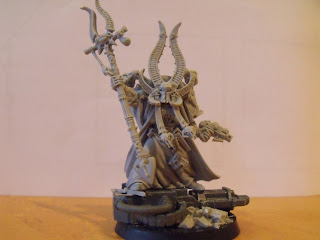 Totaltyke: My hopes of having 5 Terminators finished this weekend have been severely hampered as Grandfather Nurgle has gifted me with one of his poxes. I did manage 1.... Perhaps he has mistaken the Deathwing for Deathguard? More pics next week.
Posted by Prospero