Another blast from the past this time, as we revisited one of the first gw games I ever owned. So, what is it? 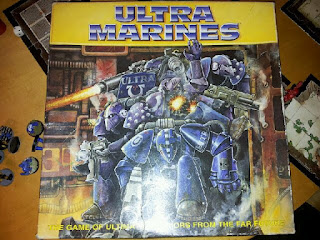 Ultra Marines was one of a series of introductory games - each in the series was a simplified version of one of the more mainstream games. It uses the 1st edition Space Hulk floor sections, and pits squads of Space Marine scouts against each other to collect as many alien artefacts as they can. 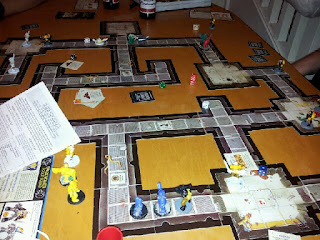 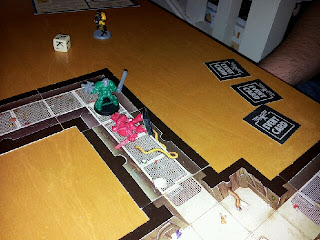 Not only are the squads allowed to shoot at each other, but each player also has Event Cards they can play at any point during their turn. These range from grenades to attack your opponents to actions that benefit your squad. The dirty tricks got off to an immediate start, with Deathbringa promptly blocking my forces in their starting room with 2 cave-in cards. Revenge on my part was swift however, as I promptly retaliated with a grenade (cards can be played anywhere on the board - regardless of where your own forces are).
After a pretty long game (due to repeated misuse of the reinforcements card, along with further dirty tricks - from all of us!) Cortez emerged as the victor, claiming joint highest artefacts and having the last scouts standing!
For a 20-year-old game, it provided some great entertainment, as well as a chance to use some of the really old scout models - I've been working on stripping the paint from them using the Dettol method. This process was not quite complete, so some more modern stand-ins had to be recruited to fill the gaps.
Well, thats it for this trip down memory lane, but if anyone else is familiar with this game, or any others from that time, tell us about them in the comments below! Happy gaming everyone...
Prospero
Posted by Prospero