Another Heroquest session recently resulted in another hole fallen into by the barbarian, and more archery based trickery from the elf. Below are a few highlights... 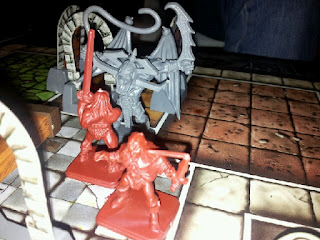 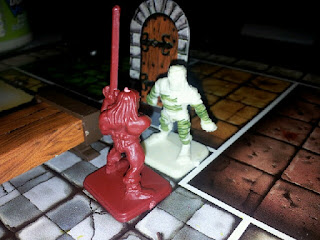 Undead and Chaos seemed to be a theme in terms of opposition in this quest (note also the Elf's reaction to the appearence of the gargoyle... let the barbarian handle it!)

And now onto some painting. With a new edition of 40k likely very soon, I'm currently waiting to see what the new rules will mean for each of my armies, so instead of adding more stuff, I decided to tackle the pile of unpainted models - starting with the rest of the Space Hulk models. 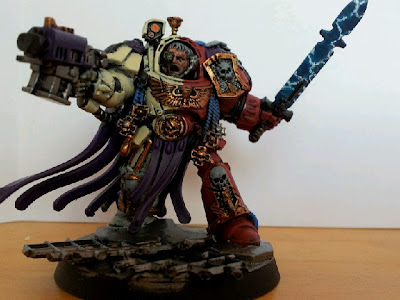 This is my first attempt at doing a lightning effect on a weapon, but I'm already thinking of other models I could add this to! 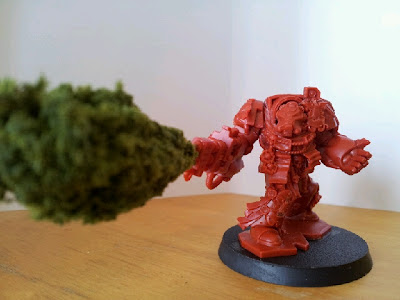 For the marine with the heavy flamer, I wanted to make it look like it was actually in the process of torching a corridor.

I drilled holes into the barrels and inserted a pair of brass rods. To make my 'flames', I added green turf that I normally use for basing, mixed with lots of PVA glue. Its still a bit fragile at the moment, but a drop of superglue on top will make it much more solid.

Of course, these are still very much works in progress. I'm also converting one marine so that it could be used in 40K as a Sanguinary Priest - will bring you all some pics of that soon.
Thats all for now - comments and feedback are welcome!
Prospero
Posted by Prospero