A short update this time. Several of us here at 11th Legion will be attending some tournaments over the next couple of weeks. Naturally, as the deadline looms, many late nights of frantic painting result. 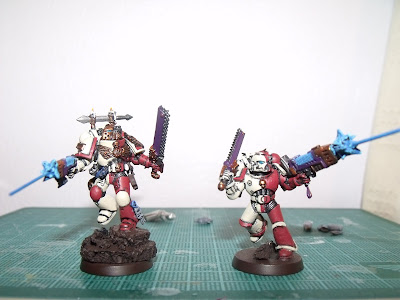 These two are the latest additions to my Knights Sanguine army. The flash has made them a little brighter than they really are, as the 'white' half of their armour is actually Bleached Bone. This was also my first attempt at adding a firing effect to the weapons. This was achieved by drilling into the barrel and inserting a length of brass rod. A blob of Green Stuff was then added, before being pulled to create several spikes. I have to say I'm pretty pleased with the results. The base of the sergeant model includes some cork tile pieces for added height - thanks must go to Cortez for providing the idea for this - as well as the cork!
I will hopefully be posting some full army pics soon. Until then, its back to the painting!
Posted by Prospero