I've been toying with this a while - I'm not happy with it still and could use some feedback.  Obviously it will have to be updated with the new edition anyway, but is the concept sound? Would these be interesting variations to play?

First up, a new mission:

BREAK POINT (Standard mission)
The command structure is the nervous system of an army; it is only as effective as those that lead it. Cut off the head, and the enemy forces will be as much use as a rapidly cooling corpse. You must find and eliminate the enemy commanders – but do not let your own come to harm in the process!

Victory Conditions
Before deciding deployment type, both sides calculate the command value (CV) of their army. Every independent character is worth two (2) points. Every squad leader (e.g., sergeant) or other synapse creature (e.g., Zoanthrope) is worth one (1) point. The CV of an army is the total number of number of points in the army

The break point of an army is half of its CV.

The game will last a random number of turns, as described in ‘Ending the game’, unless break point is reached by either player. In this case, play one additional game turn and then end the game. If only one army has reached break point his opponent wins. Any other result is a draw.

Opposing forces are marching in parallel, racing to reach the most favourable ground. The vanguard must hold until reinforcements can arrive. 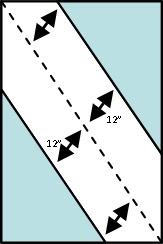 The table is divided diagonally, by drawing an imaginary line from one corner to its opposite. The players roll off, and the winner chooses to go first or second. The players must then split their armies into two equal halves, by number of units. The player that goes first then chooses one of the short table edges to be his own table edge. He then must deploy one half of his army in his deployment zone (12” away from the diagonal line) regardless of special rules to the contrary. He may choose which half is deployed.  His opponent does the same with his army in his deployment zone.

The remainder of the army will enter play on turn 3, 4, or 5. Each player secretly nominates (and writes down!) which turn they will enter. These forces arrive from the player’s own table edge.

Units from the second half may also be placed in reserve as normal, and will follow the reserve rules. If a player’s army does not split into even numbers of units, any remainder must be placed in reserve. The player may choose which units do so. Any such reserves must be declared before the game begins.

Deploy any infiltrators and make any scout moves, should any units in the deployed half of the army have these abilities.

Start the game! Once deployment has finished, the player that chose his deployment zone first starts Game Turn 1 with his first player turn. Outflanking units enter play from the long table edges.